We are now going to take a look at the 2016 cornerback class. Based on prior draft classes, the A2B™ groups cornerbacks into 5 Player Types based on their athletic profiles. 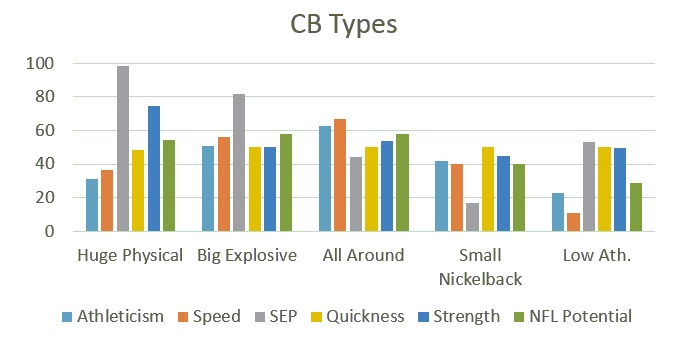 Huge Physical: This group consists of huge (~6’2” or taller), physical CBs – think Seattle CBs (Brandon Browner). Usually these CBs have lower overall athleticism, but there are a few exceptions to this rule (Nnamdi Asomugha).
Big Explosive: This group has CBs with good size (~6’1”-6’2”), explosion, and strength. There are several great CBs that fall in this group such as Patrick Peterson and Aqib Talib.
All Around: These CBs tend to have more average size (~5’11”), but show good athleticism and speed (Vontae Davis, Ronald Darby).
Small Nickelback: These are your small (~5’9”-5’10”), slightly less athletic CBs (Brandon Boykin).
Low Athleticism: These CBs tend to have limited athletic ability. Often times, they do not have success in the NFL.

Historically, the “Big Explosive”, “All Around”, and “Huge Physical” cornerbacks have had the best NFL outcomes.

Breaking Down the 2016 Class

Next, we’ll take a broad look at the 2016 CB class as a whole in terms of their A2B™ Potential Scores. 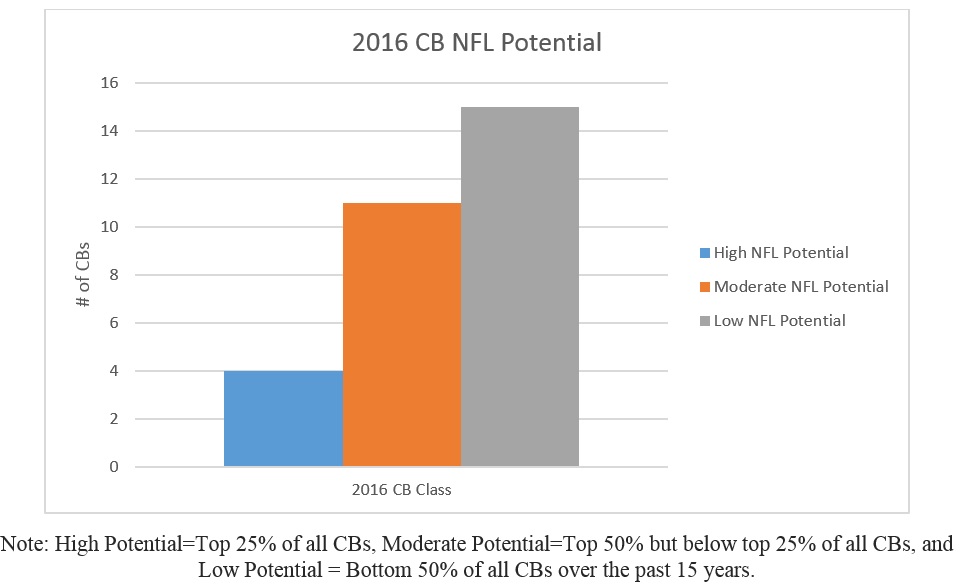 About half of this year’s prospects show above average NFL Potential, meaning 2016 is neither a great nor exceptionally poor year for CBs. This is in comparison to, say, our previous posts were we identified that 2016 is something of a subpar year for wide receivers. There is a relatively large number of mid-tier “Moderate Potential” CBs (37%) in this draft class that may represent good value in the mid-to-late rounds, but a limited number of top-tier “High Potential” CBs (13%).

Let’s take a closer look at some of those A2B™ “High Potential” prospects, some of whom may not be who you’re expecting. Here we present the 2016 draft class CBs with the 5 highest A2B™ NFL Potential scores.

The Player Type Confidence scores are something we’re recently added to the A2B™ player profile. They range from 0-100 and represent how confident we are in the player’s grouping. Ramsey’s Confidence score is lowered due to his exceptional athleticism, which is highly atypical in the Huge Physical A2B™ Player Type grouping, demonstrating that sometimes it’s good to be an odd-ball… 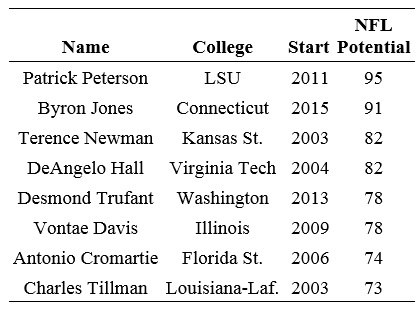 Looking at the high scorers for the 2016 CB class, a few things pop out.

That wraps up our discussion of the A2B™ with regards to the 2016 cornerbacks. Next time, we will highlight the running backs.