In this blog entry, we are going to dive into the A2B™ for defensive ends. Overall, the A2B™ does a nice job of assessing this position and projecting NFL success. We found five unique Player Types that help to broadly characterize where players lie on the athletic spectrum. Further, examination of nearly 400 defensive ends since 2000 showed that multiple A2B™ domain scores predicted real NFL performance. More specifically, Overall Athleticism, Speed, SEP, and Strength were significant predictors and explained almost 13% of NFL Performance. Let’s walk through the A2B™ for defensive ends and see what it says about the 2016 draft class (warning: findings may differ from expected; take with food; do not operate heavy machinery while reading).

Development of the A2B™ for Defensive Ends

The A2B™ classifies defensive ends into 5 Player Types based on their athletic profiles. 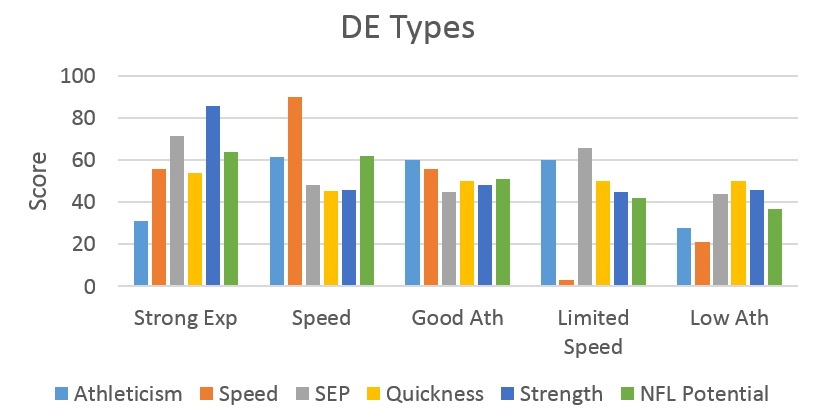 Strong Explosive: These is one of the premier DE Player Types. These DEs are characterized by exceptional Size/Explosion/Power (SEP) and Strength. Many great defensive ends fall into this category including Mario Williams and J.J. Watt.

Speed: These is the second premier DE Player Type. As the name suggests, this Player Type is defined by players that are, well, fast. Good examples of Speed DEs are Dwight Freeney, Adalius Thomas, and Jadeveon Clowney.

Good Athleticism: These are your 2nd tier DE athletes. These players tend to show above average athleticism but are pretty average across the other domains. There have been a few successful DEs falling in this Player Type such as Elvis Dumervil.

Limited Speed: These DEs are good overall athletes with size, explosion, and power but these are severely lacking in the speed department. Since 2000, there hasn’t been a single notable DE falling in this category.

Low Athleticism: Pretty obvious from the chart above that these players are not very athletic relative to their peers. Like the Limited Speed DEs, there is not a single notable player since 2000.

Based on data over the past decade and a half, your best bet is going with a Strong Explosive or Speed DE. They have been, by far, the most productive NFL defensive ends.

Seven of these players made multiple Pro Bowls and the other DE was a number one overall pick (Clowney). 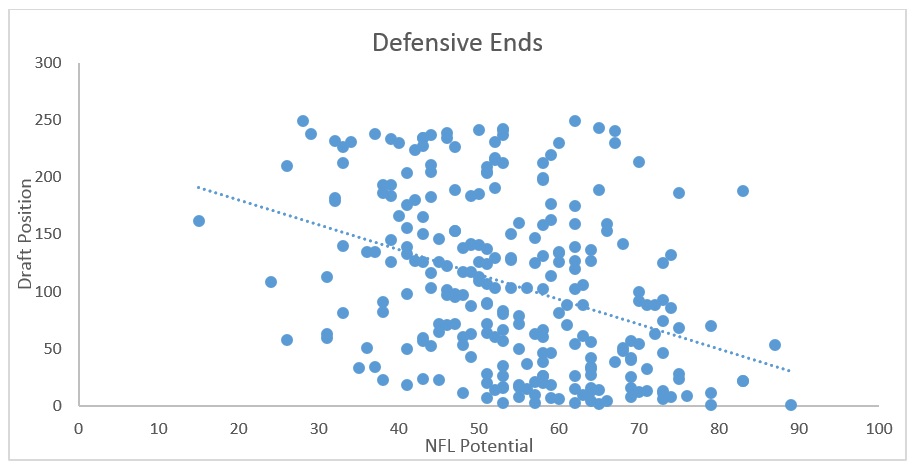 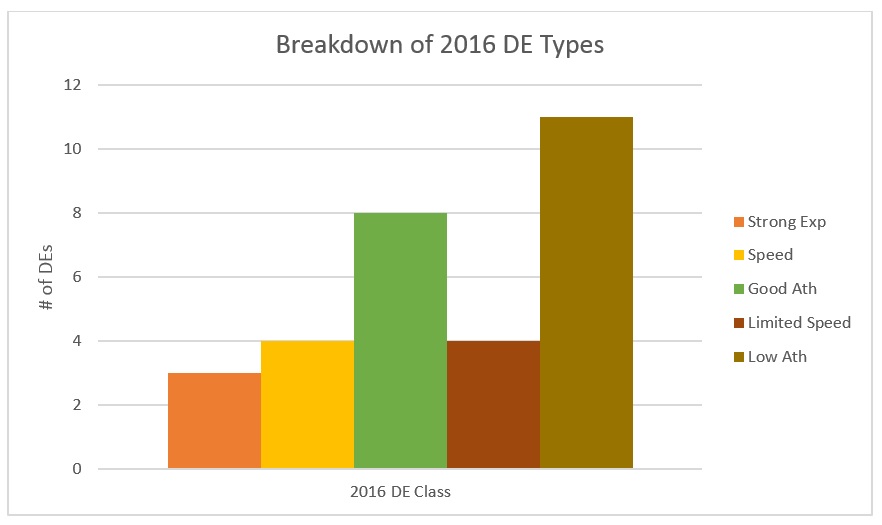 Let’s take a look at this year’s “Speed” DEs…

A few things pop out about these “Speed” DEs

Interestingly, there isn’t a whole lot of overlap between the Top 5 A2B™ NFL Potential DEs and the expert ranked Top 5 DEs1.

So there are quite a few things going on here…

That wraps up our discussion of the A2B™ with regards to the 2016 defensive ends. The 2016 DE class looks promising and there could be several nice value picks. Next time, we will highlight linebackers.